Best Use of Eggs, Frogs and Bottles 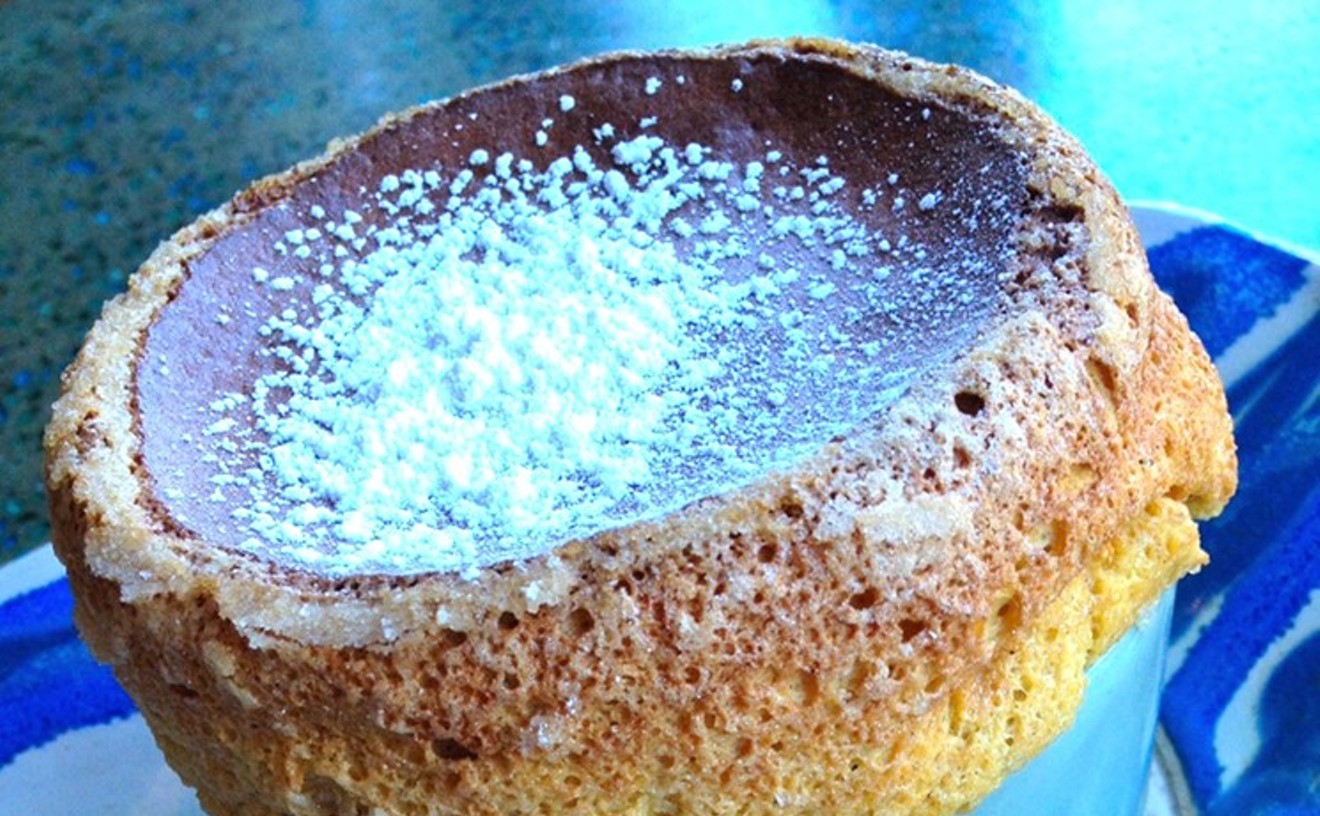 Kellie Reynolds
The days of sneaking around the kitchen while grandma makes her special souffl are over. Oh, the souffls can still be had, but thanks to Hedda Gioias Rise No. 1, the mood has definitely lightened. The bustling eatery with its browse-able shelves of recycled wine-bottle glasses (short from the white bottles, tall from the red), Torchon (French-made, embroidered towels), books and those special hidden brass frogs, just feels like a little French bistro in the middle of a funky garden...which, no doubt, is hard to accomplish in the middle of Inwood Village. The decor is a little rustic and wild and contrasts beautifully with the sometimes 6-inch souffls that grace the tables. Lobster, escargot, mushroom. Raspberry, bread pudding, chocolate. Savory or sweet, chef Cherif Brahmis souffls are decadent but not freakishly high in calories, satisfying and yet light (dont fret, servers are skilled at recommendations). Grandma would totally approve.

Best Use Of Goat Since The Warren Commission 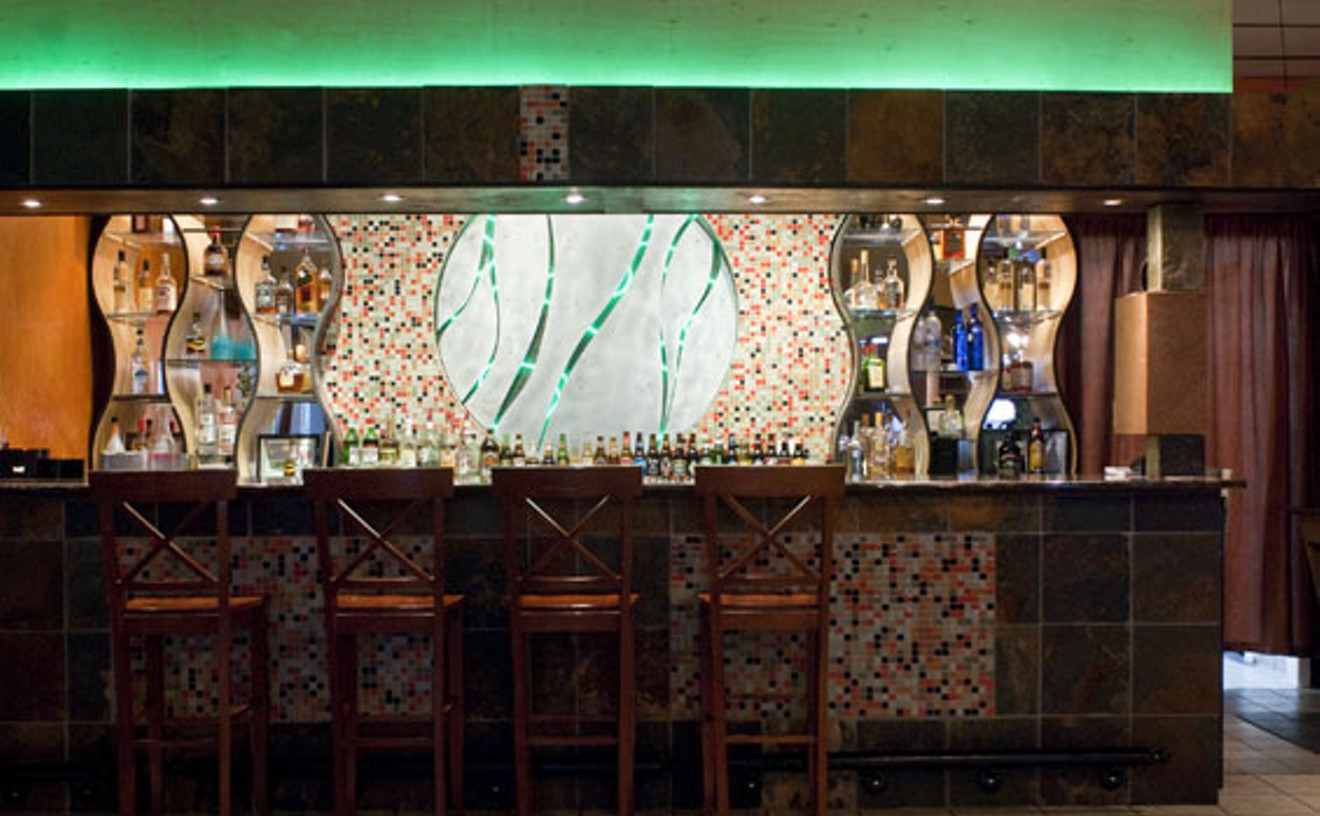 Ah, the musty, oily, stringy character of goat meat. For some reason it hasn't caught on in, you know, the civilized world. But a sample of Inca's seco de cabrito might have you second guessing first-world values. Yeah, it's all that we said—musty, oily, stringy, with bits of bone and gristle thrown in for that extra oomph. Still, there's a rustic, gamy quality that keeps drawing you in, as a good stew should. And although the fibers fall into long strands, they are tender and thoroughly marinated, providing dense, earthy notes that match well to sides of beans and steamed yucca. In the end, it's not at all gruff.

Best Use of Lychee 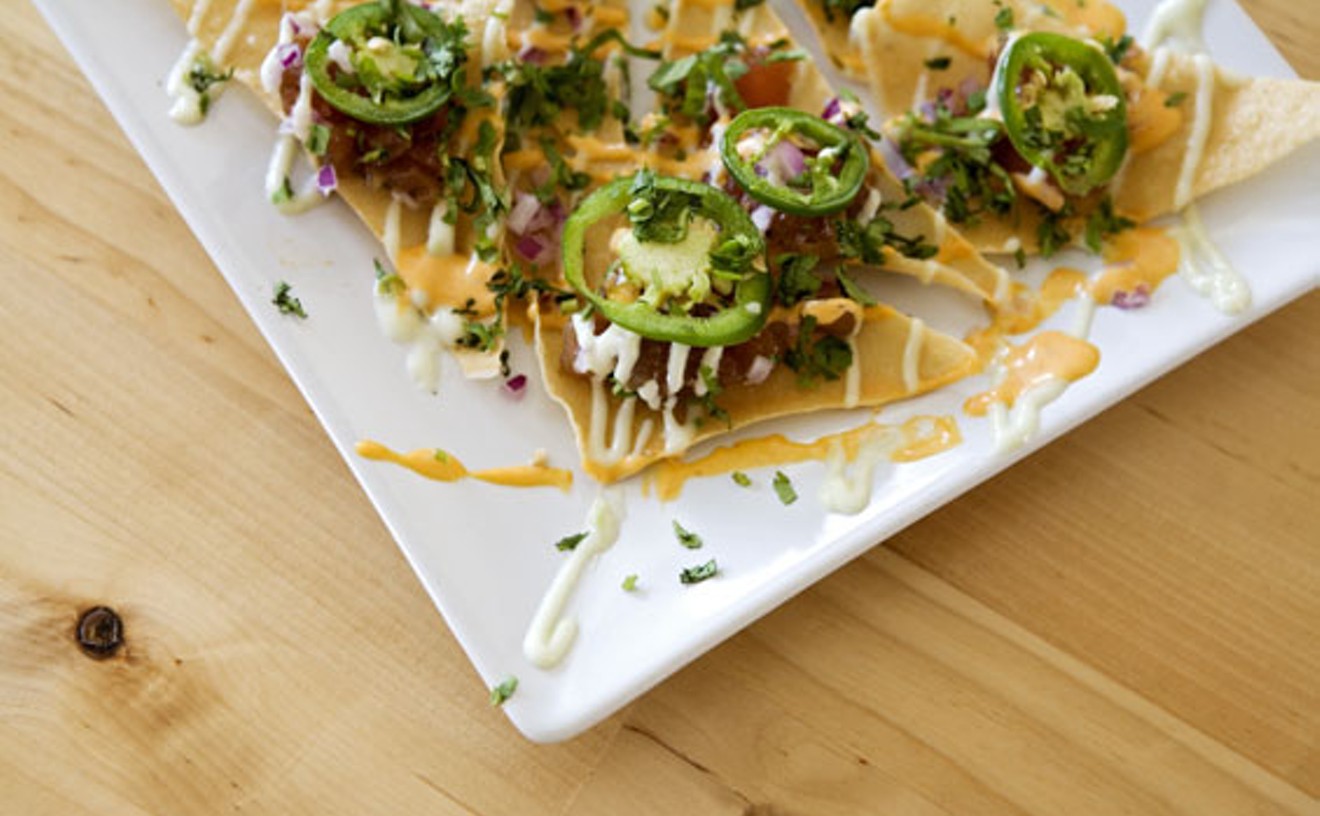 In Dallas, the lychee is quite the underrated, underused fruit. It's fragrant and sweet, tender to eat and fun to free from its bumpy red rind. Normally it's sold in Asian markets—where people are familiar with what a cool ingredient it is—and rarely lauded elsewhere as it is on the drink menu of Lumi Dumpling & Empanada Kitchen. The Lumi Lychee, for instance, combines mango rum, lychee and tart cranberry for a sweet treat whose strength sneaks up on you just when you decide it's time to pry the floating lychee out of the martini glass with your fingers and eat it. The lychee mojito is also deceptively sweet, but adventurous with its exotic twist on the usual mojito recipe. Girl drinks perhaps they are, but it's nice to see the lychee get some play around these parts. And since it's high in vitamin C, it might actually help with its own hangover. Hmm, we might need more research for that... 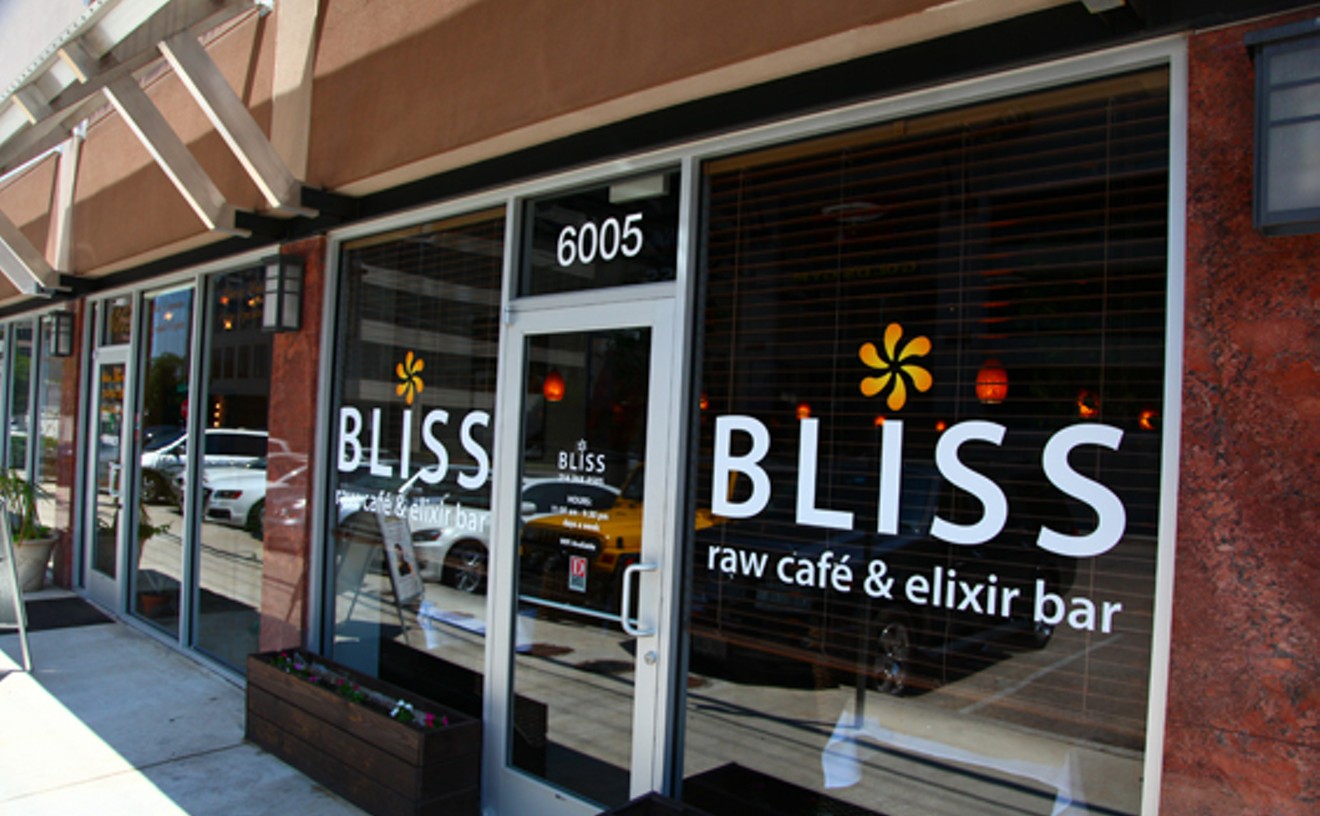 This small, mostly outdoor eatery (albeit with plastic covering and stylish décor, including crisp white tablecloths) specializes in vegetarian, raw and vegan dishes, and their salads and faux-lasagna don't disappoint. Yet the most intriguing attraction is the "elixirs," which the Web site describes as "medicinal liquid potions" complete with phytochemicals and antioxidants. We're not sure what all that means, nor were we sure what to think when we opted for a drink called, "Rainforest Bliss: Chocolate Bliss with rainforest rush peak cell function booster" (it was a toss-up between that and the "Cosmic Dharma Latte: A full-on medicinal cinnamon explosion that lifts you up and rawks your day!") The cacao-filled wonder was different and delicious—with hints of orange and vanilla flavors. Whether or not its health-enhancing powers are as great as the menu claims, this is no doubt a scrumptious departure from the average beverage menu. 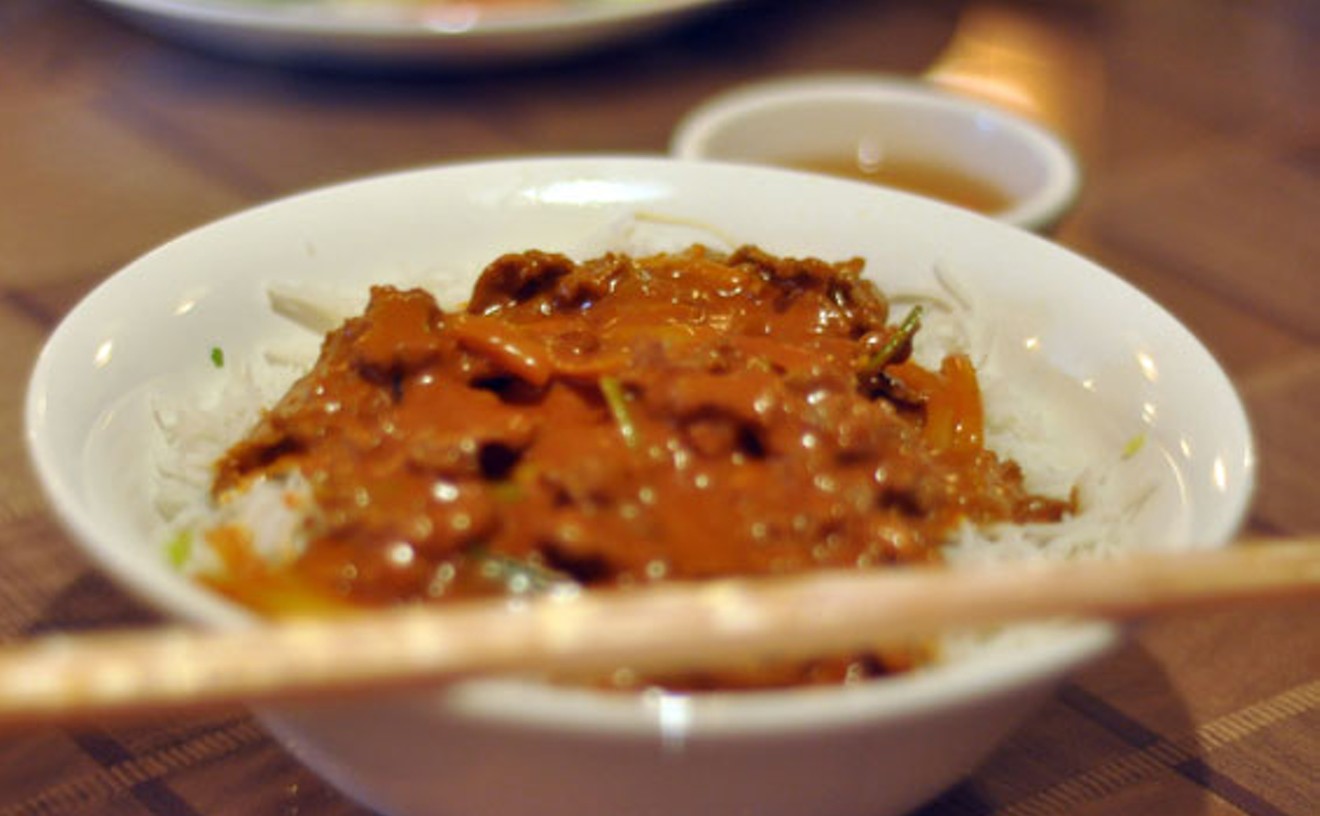 The first time you pull up to the dump that is Mai's, you think, "No way in hell I'm going in there. I'm too young to die." Oh, but once you actually risk it...Yes, there are plenty of authentic hole-in-the-wall spots in Garland serving great pho or bun mang vit. But Mai's is across-the-board wonderful, from rich noodle dishes, steaming clay pot creations, the delicate rolls, the fiery spices to, well, everything on the menu. There's a reason the place has become a Dallas dining mainstay. And a reason we keep coming back, again and again. 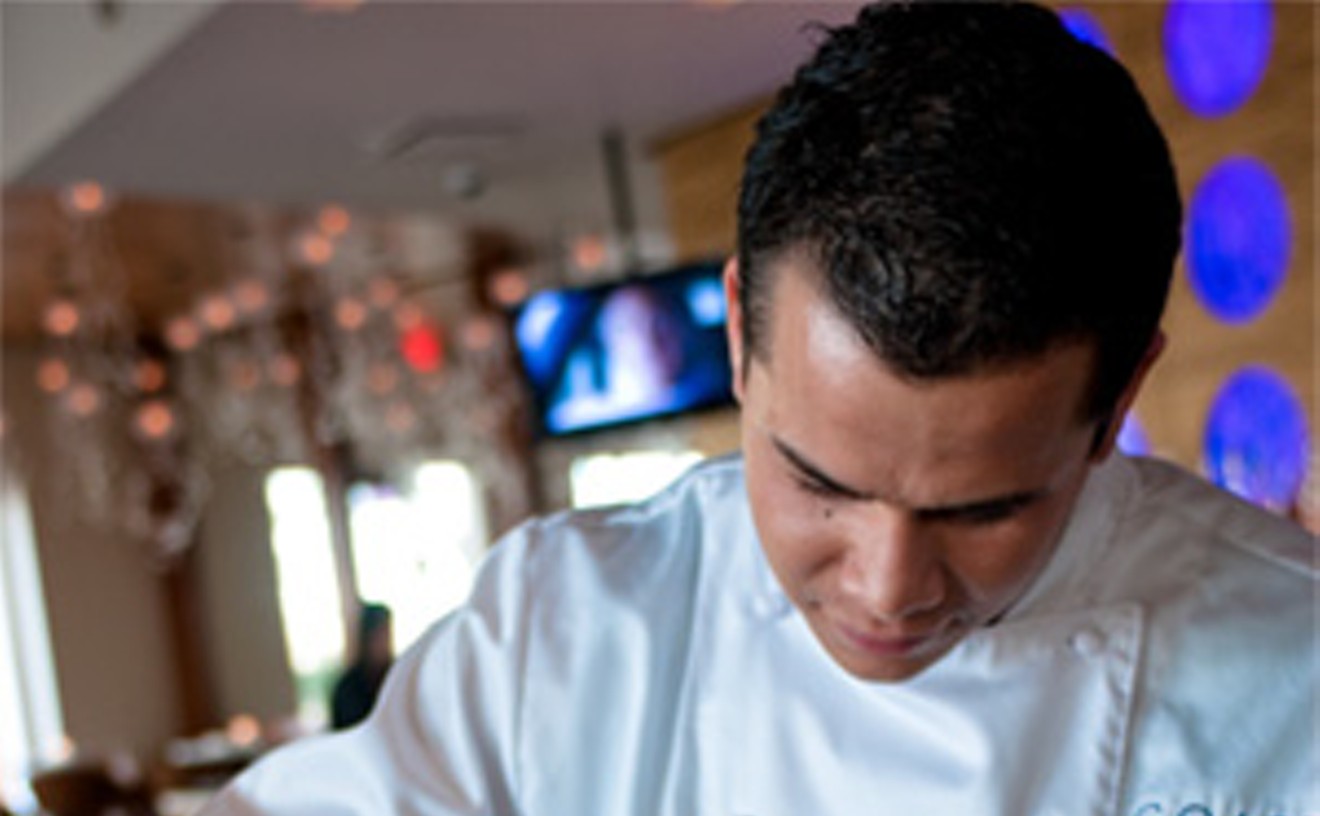 It's one thing when servers show proper deference and reach in from the correct side. What sets the staff at Coast apart has little to do with such mannerisms. Although they are tidy, there's nothing special in their approach. But when we asked about a dish, these guys knew the details. When called upon to repeat specials, they did so without hesitation. When they recommended something, it turned out to be very much worthwhile. And, most important, they made no mistakes on our visits. Hope they keep it up.

Food: My Name Is Nobody Web extra: Hear from some of Dallas's new and unheralded chefs in our video feature.

It's cliché to paint Dallas as a city that likes things big. Whether it be stadiums, scandals or the name recognition of chefs at the restaurants we flock to, size has always mattered in these parts. We cheered Kent Rathbun, chef-owner of Abacus, not only for his achievements on the television hit Top Chef, but also for hoisting a moose head with his bare hands during the course of that series. And it was only a couple years ago when venues opened by a couple of the area's most famous kitchen celebrities-Stephan Pyles and Dean Fearing-took turns capturing popular fancy.

They still hold sway, these big-name chefs. But since the moose incident and the glitzy grand openings, a group of nobodies began poking giant holes in our starry facade. As Dallas Fish Market neared completion, the owners tapped Randy Morgan to head the kitchen, and he quickly turned the downtown space into the city's finest seafood restaurant. Young Julian Barsotti arrived and his place, Nonna, quickly put a stop to all that "Dallas has no good Italian" talk. Then along came Graham Dodds at Bolsa, an Oak Cliff destination dedicated to fresh, local and seasonal ingredients-and last year's hottest new establishment.

This year has been much the same. Nick Badovinus' return to the scene caused considerable buzz and two-hour waits for dinner at Neighborhood Services. More recently, Marc Cassel stepped back into the kitchen after a two-year hiatus, stirring much the same frenzy. Yet at the same time, the unknown (in this market) Sarah Johannes filed into the other much ballyhooed new restaurant, Wolfgang Puck's Five-Sixty. Almost immediately critics began mentioning her work alongside that of Anthony Bombaci (Nana) and Avner Samuel (Aurora). Jean-Marie Cadot worked quietly in North Dallas' Lavendou for quite some time, drawing little media attention. In 2009, he joined with chef Gaspar Stantic, setting up Cadot-a contender for best new restaurant. Out in Rockwall, Randall Copeland and Nathan Tate's AVA followed Bolsa's local-seasonal lead.

"I think there's been a grassroots movement for four or five years now, but people weren't necessarily aware of it," Copeland says of the so-called "locavore" trend, which has allowed some of these new chefs to break into the culinary spotlight. "The guys at Bolsa had no idea the people that would come-it's working."

Many of these new restaurants have adopted the local-seasonal-sustainable mantra to some extent. They've also been willing to discard the perks of a once pretentious scene, refusing to accept reservations, welcoming diners clad in non-designer jeans or even shorts, packing tables close together and so on. Unlike the 500-seat steak palaces that dominated fine dining in the late '90s boom, these guys think simple and small. Bella in Uptown boasts room for perhaps 50 guests. Lumi, the fun Asian-Brazilian dumpling spot on McKinney Avenue, allows for about the same, but parking for maybe 15 cars. Bolsa doesn't even offer valet parking. One of the owners, Chris Zielke, encourages new arrivals to pull up on the sidewalk. "Hey, this is Oak Cliff," he says, deliberately shrugging at big-city niceties. By consciously breaking traditional Dallas rules ("I grew up here and didn't know there were four seasons," Copeland points out, explaining the city's reluctance to join the "slow foods" movement), these chefs have eroded the tiers that defined nightlife for so long. One now sees ballgame attire at Bob's and Al Biernat's, while almost every restaurant with aspirations for success touts organic dishes.

For his part, Barsotti eschews over-engineered dishes. "When I go over there [to Italy]," he says, "I come back inspired to be simplistic." David Pedack even took a step back, opening a bar on Henderson-Blue Collar Bar-featuring mid-century blue plate items, such as Salisbury steak.

The big boys have, of course, taken notice. Rathbun followed Pedack's lead with a more extravagant Blue Plate Kitchen. And Pyles is ready to throw open the doors on an "international small plates" destination called Samar.

However fresh these faces may seem to the local dining crowd, the rising stars have spent considerable time in professional kitchens. Copeland served as sous chef at the Green Room and then in Las Vegas before AVA. "It took me a good couple years-watching, asking questions," Morgan says of his seafood apprenticeship, which included a stint with Oceanaire. "There are so many ways and combinations to do fish." Christopher Short of the outstanding Bella served as executive chef for the Crescent Court and for The Mansion's private dining program. "It's not as glamorous as people think," he says of restaurant life. "You gotta have strong legs under you, because the day is long and the weeks get longer.

"True enough. But their work is changing the way Dallas perceives both dining and celebrity. For the first time in quite awhile, smaller is better.

Other Winning Food Suggestions From Our Readers 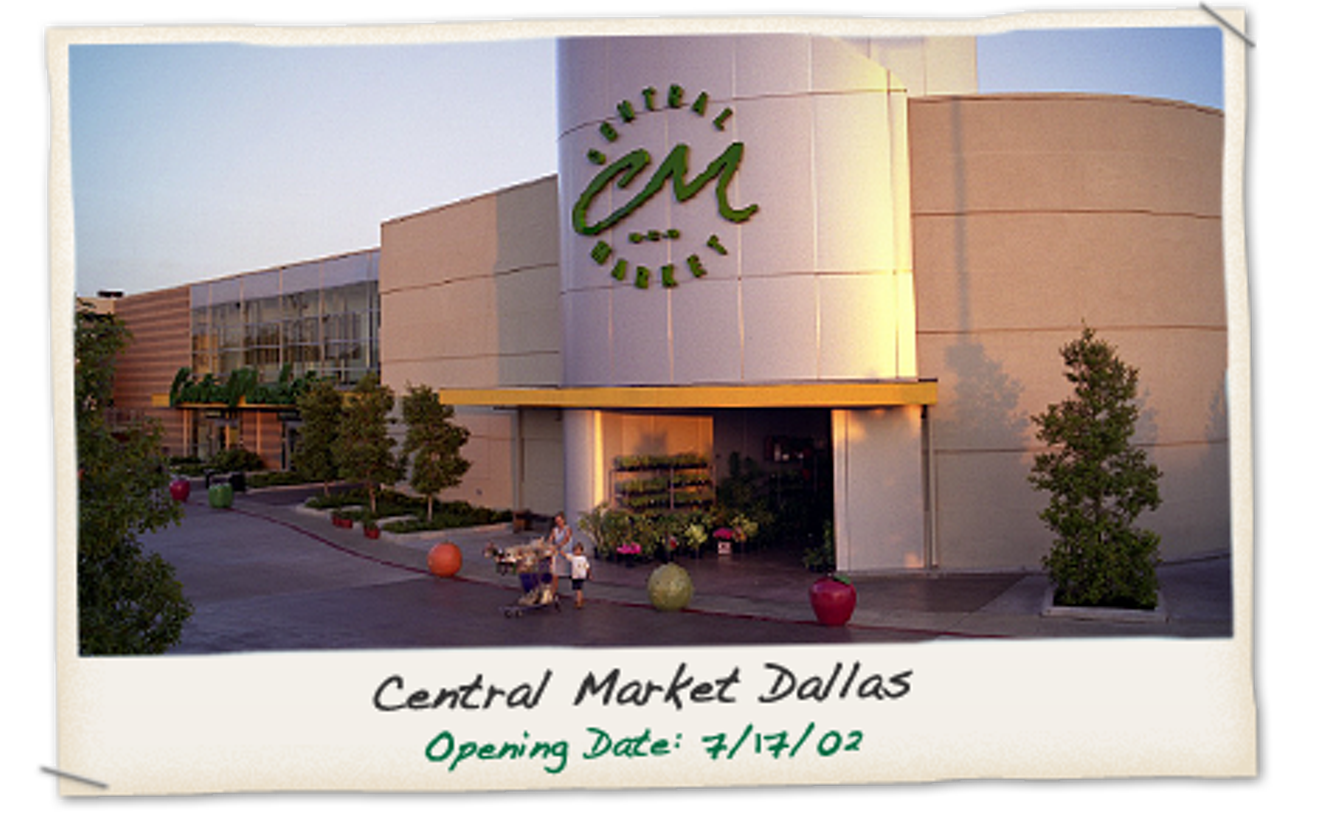 Our Yiddish mama told us we'd never get a good bagel in Dallas—not until H&H moved down here from NYC, hah! But a few months back we stumbled across the most extraordinary thing: a hot everything bagel straight from the Central Market ovens. It was a revelation—not because it was H&H awesome (someone once wrote of those offerings that they taste like hot marshmallows...mmmmm, hot marshmallows), but because it was so crispy-perfect on the outside and steamy-moist on the inside and needed not a smidge of cream cheese to make it palatable. Seriously. Central Market. Don't believe us? We'll meet you there tomorrow morning. Bring your empty stomach. And, sure, some lox.

Best Blast From The Past, Concept Edition

From the '20s to the '50s—a golden age if you ignore depression, war, racism and gray flannel suits—traveling businessmen lived on the blue plate special, a diner's issue of a meat and two sides for one low price. The institution died out, thanks to the proliferation of even cheaper fast-food stands...that is until economic tides turned and guys like David Pedack recognized an opportunity. The owner of Blue Collar Bar built his small kitchen (it's a bar first) around the blue plate special concept. Hey, mashed potatoes, green beans and Salisbury steak? In times like these, that's living.