In the last decade, Greenville Avenue has sacrificed its reputation as a live music strip to cater to the brunch and artisanal Popsicle crowd. That's well and good, but we were still sad to see the street's last great music venue, Crown & Harp, hand over its keys in May. The two-story bar venue got its start in '97 as The Cavern and rebranded as The Crown & Harp in 2011, when it further embraced its British pub aesthetic. Throughout its two-decade tenure, the upstairs was one of the best spots in Dallas to dance during DJ nights and the downstairs was an equally great spot to see a rock show. The small stage, booth area and even the fish tank in back created a cozy house party feel. If even 10 people showed up to see a band, the layout made it feel like a rager. 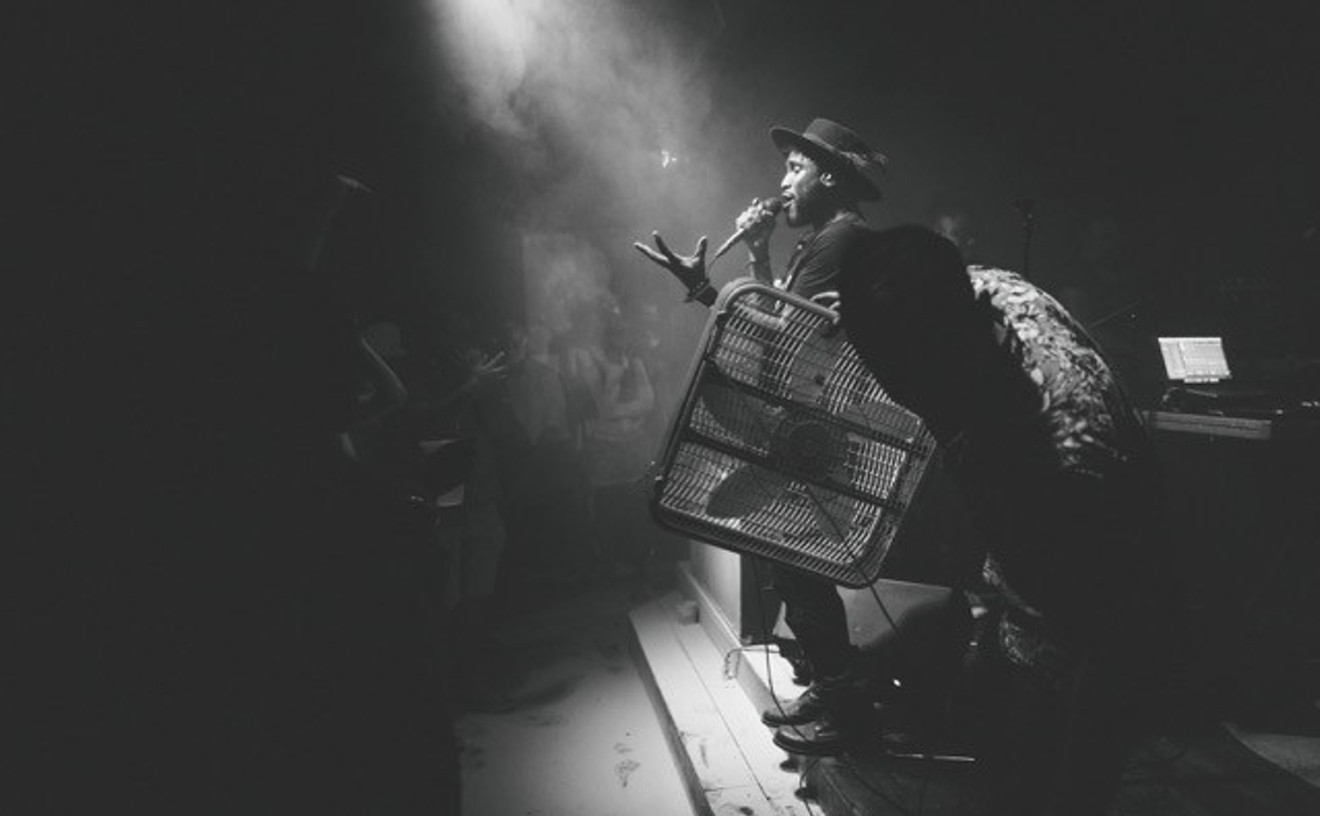 There are only a few acceptable reasons to end a show early, but your keyboard catching on fire is definitely one of them. In May, Medicine Man Revival proved it has a crazy work ethic when that happened mid-song at Independent Bar & Kitchen, and the group finished out the show. The 1974 Rhodes had been in storage and unplayed for 30 years, which resulted in some undetected loose ground wiring. During the climax of the band's set, "Bittersweet," the keyboard began smoking and then went up in flames. A nearby photographer unplugged the equipment while also capturing the event on video, making room for the band's manager to come in and douse the keyboard with a fire extinguisher. Many attendees evacuated because of the smoke filling up the room, but just as many kept right on dancing — the keyboardist included. He kept playing the Rhodes until someone carted it off and brought him a new instrument. 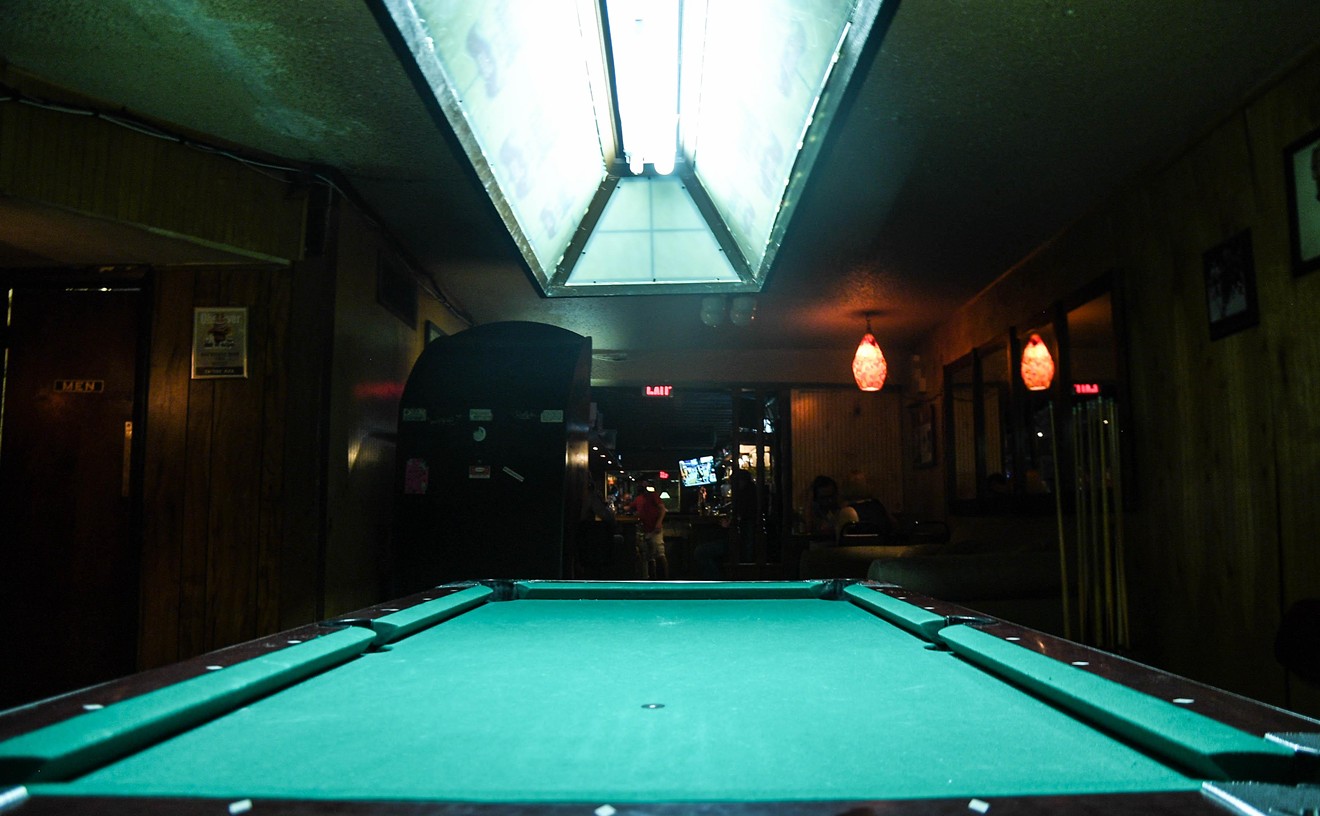 Lakewood Landing doesn't have the largest pool table or the most well-cared-for pool table. But it has the best pool table. The Landing is a pit stop for anyone east of Central Expressway who feels like a nightcap, so you're never short of partners, whether friends you've run into or ones you haven't met yet. Booths are arranged around the table, ideal for spectating and commentary. And during the game, you're an arm's length away from the killer jukebox, where you can play everything from Bowie to Hank Williams. When Hank starts singing "what you got cookin'?" check your watch. If it's after midnight, you might think about ordering one of the bar's famous jalapeño cornbread-battered dogs. They're off the menu. 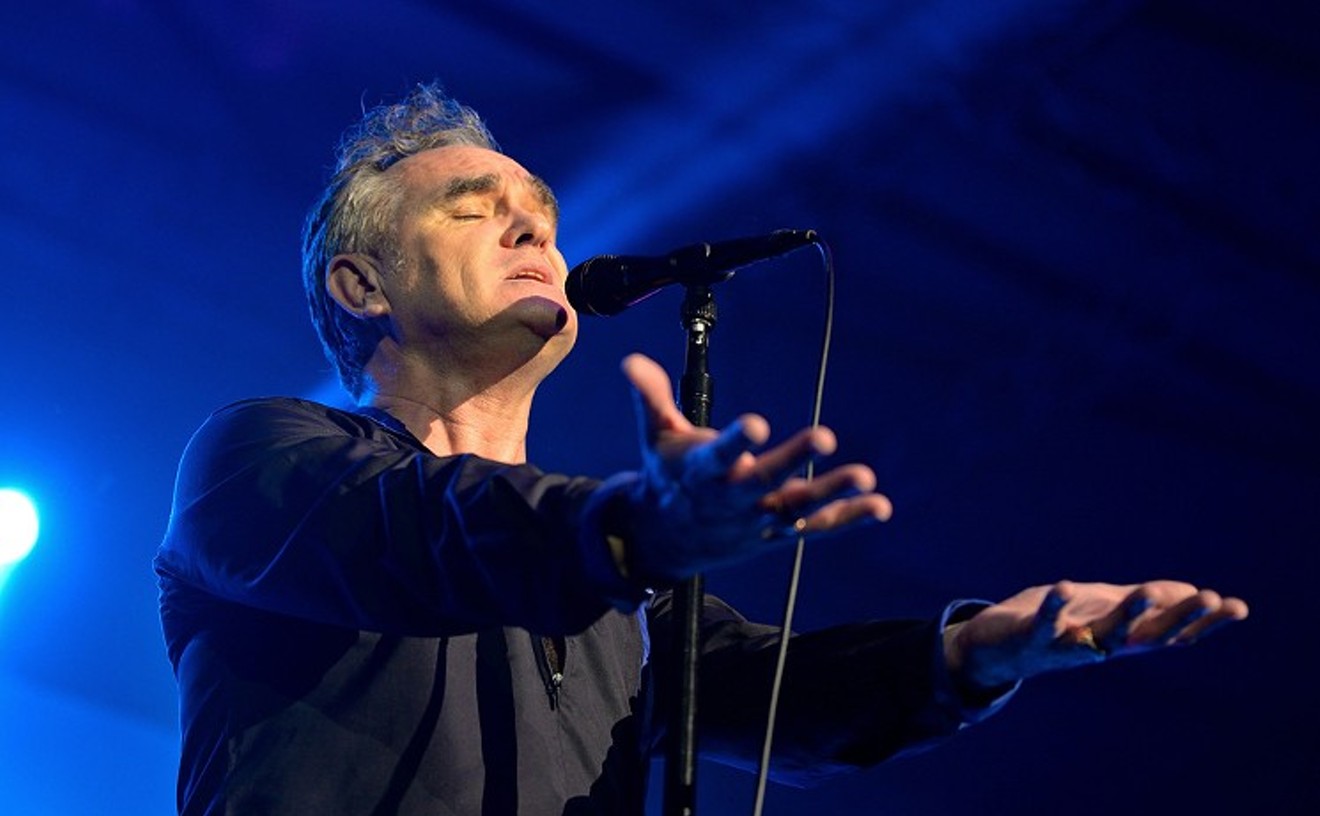 A Morrissey show isn't a Morrissey show until he's canceled and rescheduled. But when the English singer and songwriter, best known for his time as the frontman of the Smiths, did this three times with his November 2016 Dallas date, we were skeptical the show would happen at all. We even went so far as to prepare a list of Morrissey-inspired events to attend when it fell through. So color us surprised when Morrissey showed up to the Majestic Theatre on April 15 and gave what was by all accounts one of his best shows in years. Wearing "Fuck Trump" shirts, Morrissey and his band played through a 70-minute set list of songs from his solo career, as well as a few Smiths covers like "Last Night I Dreamt That Somebody Loved Me" and "How Soon Is Now?" That will do for an apology, Morrissey. 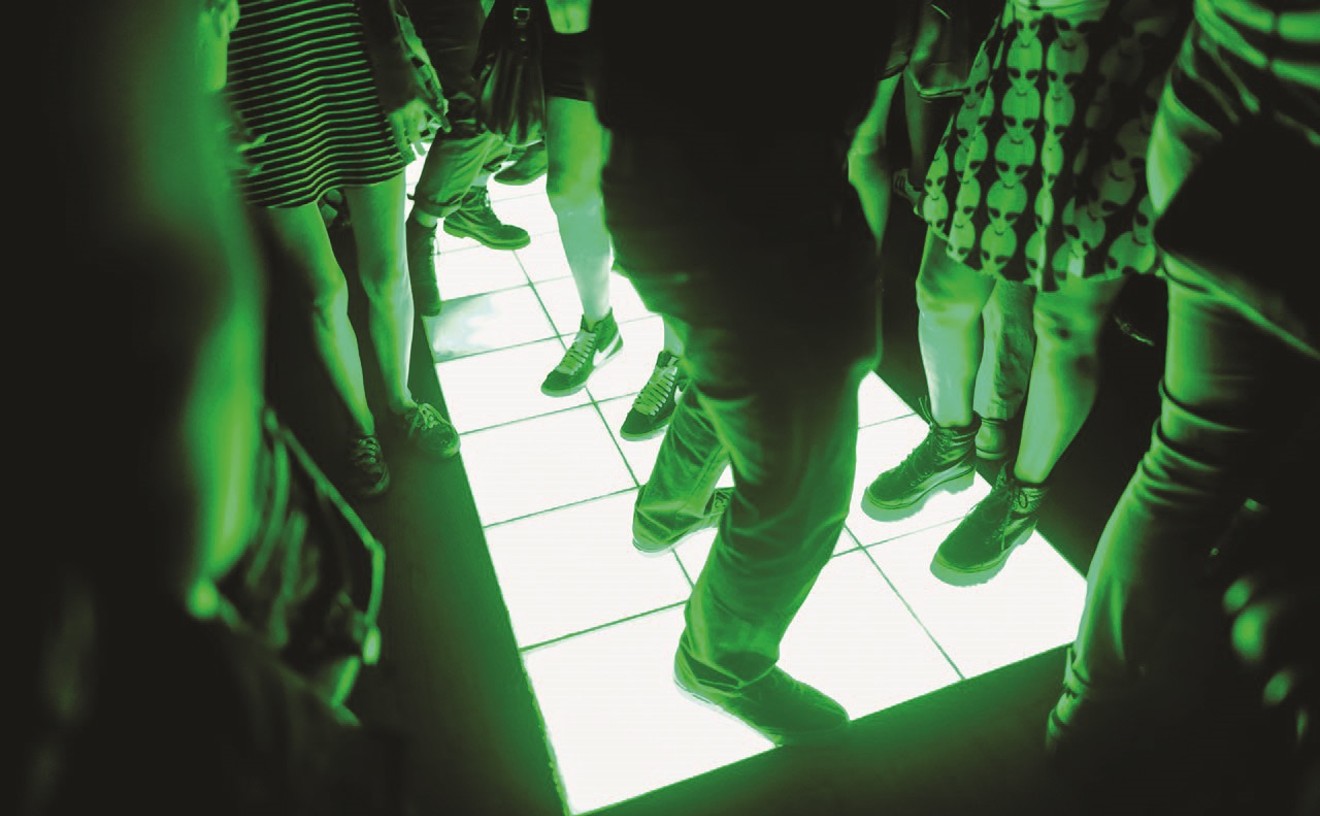 It's not hard to declare It'll Do the best dance club in Dallas because it's leagues beyond all the others. Those who value exclusivity, expensive bottle service and waitresses in short dresses on their nights out dancing may disagree. But for those who just want an unpretentious and fun place to let loose to good music and maybe meet a new dance partner, it doesn't get better than Brooke Humphries' Old East Dallas establishment. For a cover that usually falls between $10 and $20, you can hear some of the best DJs in the world, like Kevin Saunderson and Danny Tenaglia, who make It'll Do their stopping point when they come through Dallas. And the multicolored, light-up dance floor is the perfect stage for your peacock courtship display. 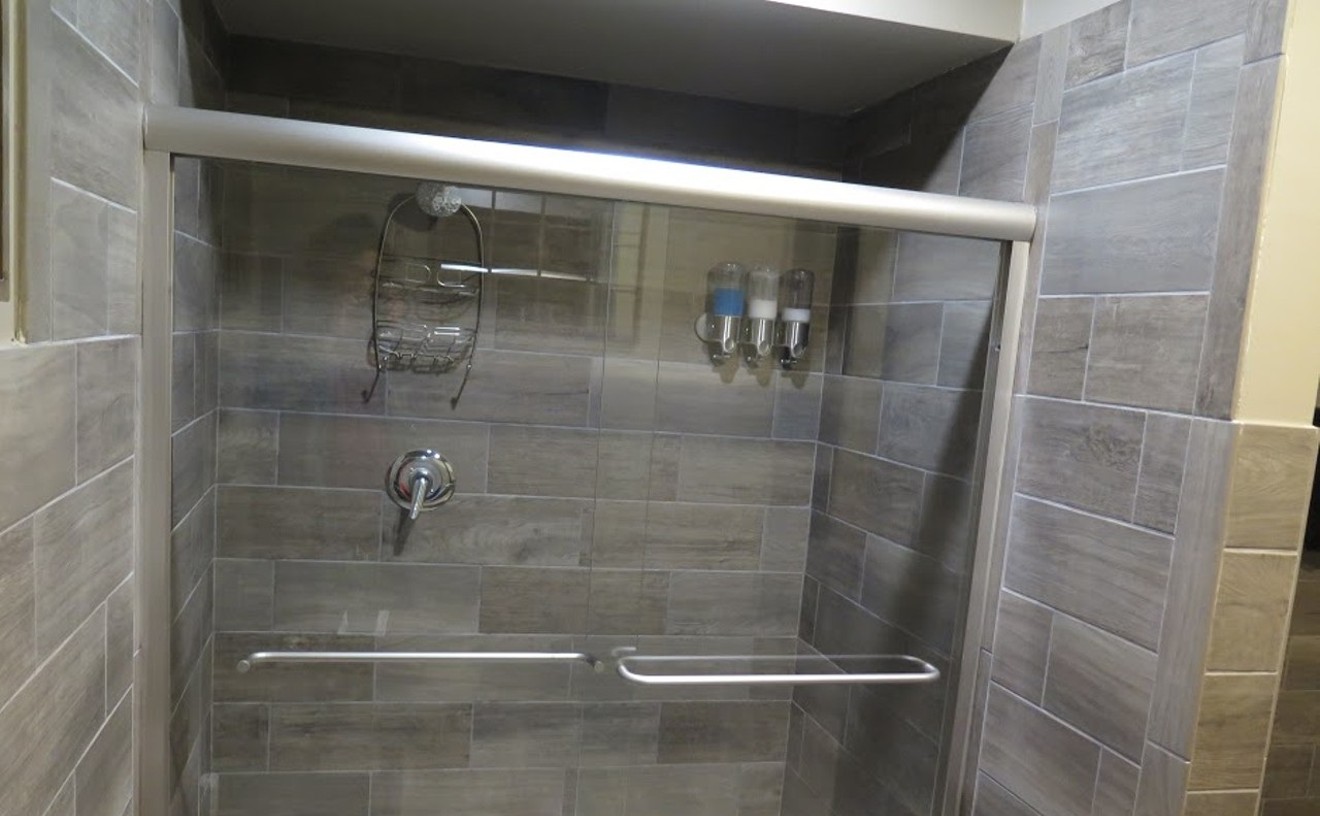 Even the sparsest green room is, by definition, awesome. There's almost always free stuff to eat and drink, and unless you're in the band, which you're probably not, you're not supposed to be there. Who doesn't enjoy trespassing? So you can imagine our level of excitement when we got a look at what the Bomb Factory has backstage: It's like every other venue's green room on steroids. There's a dining area; a weight room; and three rooms with TVs, couches and spacious, fully stocked showers. Most useful of all to touring bands, there are three sets of washers and dryers for catching up on the dirty laundry that has stacked up on the road. Can we move in?

Best Place to Have Your Band Shirts Printed 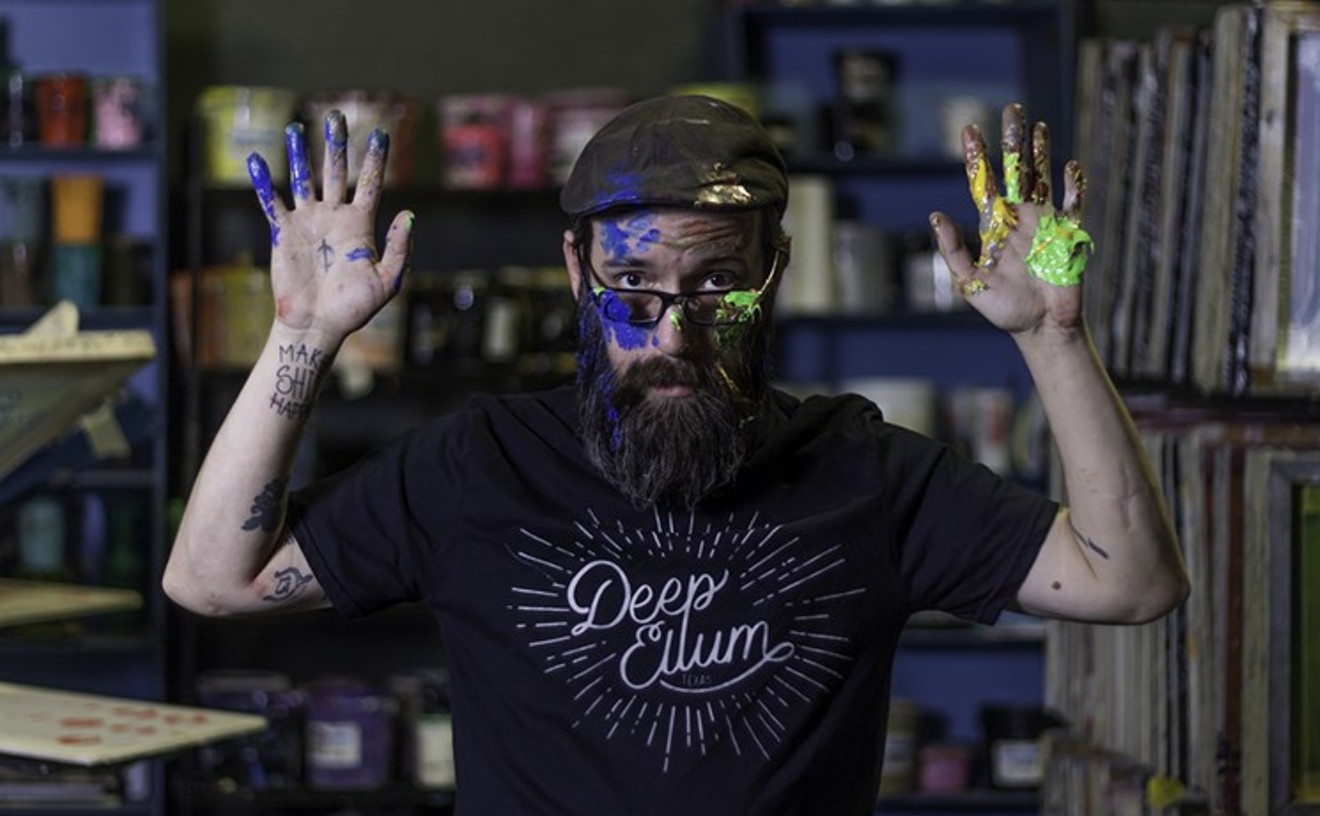 Every band needs a cool shirt, and who better to help you whip one up than fellow Dallas musicians? The owner of Lewellyn's Print Shop, Chris Lewellyn, is a drummer who has been in the music merch business for nearly 20 years. He got his start working with Reverend Horton Heat and opened his own shop between Deep Ellum and East Dallas after teaching himself how to screen print. Lewellyn's employs Hunter Moehring of Sealion and Taylor Smith of Loafers and also designs posters, album covers and even websites. You'll see the team's handiwork on merch for local bands like Party Static, the venues Three Links and Double Wide, and on goods for national acts like the Toadies and Hank Williams III, too. Lewellyn also strives to accommodate his employees' rehearsal, performing and touring schedules, so when you give your business to this shop, you can feel good about supporting the Dallas artist community.

When Kanye West brought his Saint Pablo tour to American Airlines Center last fall, he brought with him a moving stage unlike any we'd ever seen. Throughout his succinct, one-hour-and-40-minute set, West was suspended above his 20,000-person audience on a giant platform that glided around the arena and left him mostly in shadows. Smoke and light billowing below him gave his ride the appearance of a UFO, and when they weren't surging with him, the illuminated attendees had their phones out to capture its brilliance. The notion of audience as spectacle is not a new one, but it felt new in West's hands. As we wrote in our review, the stage design was a perfect metaphor for West, whose public persona is at once an enigma and an attention hog. The 40-year-old rapper didn't phone it in with his 30-plus song set list. He made the unusual choice of performing covers of songs by Schoolboy Q, Chief Keef and Drake — on which he has features — along with inspired medleys of his own hits, such as "Power" and "Can't Tell Me Nothing."

What happens when you get comedians and actors Charlyne Yi, Thomas Lennon, Udo Kier and Michael Pare together? They head to the Addison Improv. (And no, that wasn't the punch line to a bad joke.) This spring, they were all in town filming Puppet Master: The Littlest Reich and took a trip to see their friend, Craig Robinson, perform at the Addison comedy house. Few comedians, save Louis CK, Bill Maher and Jerry Seinfeld, are big enough to fill out a venue like the Majestic or Music Hall at Fair Park; anyone else who's any good — and there a lot of them — heads to the Improv. In addition to Robinson, this year the club hosted Piff the Magic Dragon, Steve-O of Jackass fame and India's most famous comic, Vir Das. Addison Improv is useful, too. If you're working off a ticket, it has a defensive driving course that, unlike most, won't bore you to tears and is somehow also legit.

Eighteen years after it quit playing, legendary Dallas rock band Tripping Daisy returned for a victory lap. Its first show back, at Club Dada, was packed equally with Gen-Xers who followed them closely in the '90s and young fans who had, until that moment, never had a chance to hear the MTV hit "I Got a Girl" performed live. The reception was so positive and powerful that the band played for two hours, including repeats of six songs. The reunion continued with two more dates in the Dallas area — at Homegrown Fest and NyTex Sports Centre — as well as gigs in Houston, Waco, San Antonio and Austin. Frontman Tim DeLaughter remained vague about the band's future, but when the NyTex gig arrived, it was clear another goodbye was imminent. Energy at the show was sky high, with laser lights, bubbles, 750 pounds of confetti and numerous crowd-surfers, including DeLaughter's son. Breaking up is hard to do, but we applaud the band for giving the brief reunion its all and leaving us wanting more. Here's hoping DeLaughter was serious when he said the group might return in another 18 years.